The outer layer of a brown rice grain is nutrient-rich, even with Vitamin B, especially at the bran and aleurone. However, rice is usually consumed in its milled form (rice grain without the outer layer). This is due to the oils in the outer layer developing a foul taste and smell for the rice grain when it is exposed  and combined with oxygen, especially in tropical and sub-tropical climates. The milling method removes the nutritious outer layer for the sake of preserving the longevity and taste of brown rice.

Black rice is rare and can sometimes be found in local Whole Foods stores. Similar to brown rice, black rice has an anti-oxidant abundant bran. However, unlike brown rice, its flavor is not rotten despite being un-milled. Black-rice bran contains an antioxidant known as anthocyanins, purple and red tinted pigments that are linked to a decreased risk of heart disease and cancer, improvements in memory, and other benefits. However, it still does not address the majority of Vitamin A Deficiency issues. 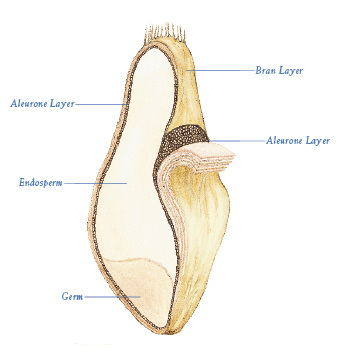