Lives are at stake due to Vitamin A Deficiency 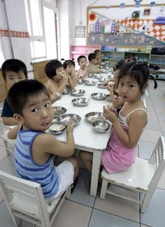 Three Chinese officials identified by Green Peace were sent on permanent leave after feeding children "Golden Rice." These children were unaware that Golden Rice was being fed to them. Instead they, along with their guardians, were informed that it was just rice with more beta-carotene. Scandals have risen that there is something to hide about Golden Rice due to the fact that they were eating Golden Rice was hidden. Moreover, the public believes these children were being utilized as "test subjects" or "human guinea pigs." Although, the Chinese government supports the rice of genetically modified crops,  the Chinese public remains skeptical about the possibility of hazardous chemicals in food and this incident has only tainted the reputation of genetically modified organisms even more.

What are possible solution(s) to the problem GMOs & Golden Rice bring?

Like most genetically engineered or modified products, Golden Rice's best solution are labels. Many believe they have the right to know what is in our crops and whether the foods we are consuming contain organic products or if they have been altered. In the United States, Prop 37 argued that citizens should have the right to know what is in their purchased foods. Moreover, it sought for education and awareness about food so people are knowledgeable of the foods they should be purchasing. This would at least give people the option to either consume the genetically modified food or not.