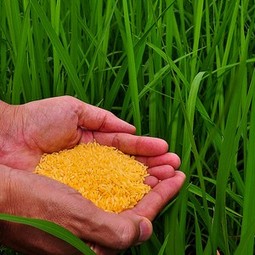 Golden Rice is genetically modified white rice, containing beta-carotene. Beta-carotene, an excellent source of Vitamin A, is lacking in impoverished countries, leading to an increase of blindness. Albeit, there are currently no varieties of genetically engineered rice, that are commercially grown, scientists have provided Golden Rice to small scale farmers, free of charge in developing countries.

In 1984, the Rockefeller Foundation held a conference at the International Rice Research Institute, to discuss and investigate biotechnology techniques and how they will assist farmers in impoverished countries, to gain larger harvests. Gary Toenniessen, the leader of the foundation's biotechnology program, and Peter Jennings, creator of one of the most famous varieties of rice (1960), discussed the yellow endosperm gene. Jennings discussed how the gene is a signal of the presence of beta-carotene, an excellent source for Vitamin A.

In 1992, a meeting was held between experts to furthermore discuss the research found. During this meeting, two biotechnology professors, Ingo Potrykus and Peter Beyer met and combined their wits to start the Golden Rice Project. They discovered that the biosynthetic pathway, which enhanced the health-promoting qualities of a crop, was already present in the rice grain. Two genes were required to reset the whole biosynthetic pathway. Since then, Syngenta, a global Swiss GMO company has then developed  a new and improved version of Golden Rice, referring to it as "Golden Rice 2."